Readly, the digital magazine newsstand, has delivered a dramatic 84% year-on-year rate of growth for the second half of 2016, clearing over 4m issues read of UK-published magazine brands in the six-month period.

Ranj Begley, Readly UK’s Managing Director, said: “Our figures are being driven up by two factors. Firstly, we have been investing in consumer promotions to push up our subscriber numbers. Secondly, we have been stimulating our existing subscribers to read more. The net effect is this big jump in the total number of digital issues which we are delivering for publishers.”

Readly’s usage figures show that it is managing to embed its service into the daily routines of its subscribers:

Ranj Begley: “We are trying to make reading a magazine more like using a social media platform. That means that we have to satisfy the longer, more traditional magazine reading occasion, when consumers want to settle down, block out the world and spend time with their favourite magazine brands. Yet we also prompting subscribers to snack in short bursts, to try to make magazine reading a daily habit, more like social media usage. It is this second aspect where we have made real gains over the last year. It is here where the real battle for magazines to hold on to their readers is taking place; and the Readly app is allowing this to happen.”

Readly is the UK’s leading digital newsstand and has pioneered the all-you-can-read subscription with a monthly fee of £7.99 which gives consumers access to a range of 800 UK magazine brands as well as a growing inventory of over 2,000 international titles.

This year has seen four key elements of the Readly strategy coming together to drive its current growth:

1. Cutting the consumer price. Having launched in the Spring of 2014 at a monthly subscription rate of £9.99, Readly reduced the price in March 2016 to £7.99. The thinking was to move beyond the core market of magazine enthusiasts into the mainstream entertainment sector and to appeal to consumers who already have subscriptions to services such as Netflix, Spotify, Sky and Amazon Prime.

2. Increasing consumer promotion. With a mix of its own promotional activity, and some important partnerships, Readly has raised its consumer profile considerably over the last few months. A key partnership has been with Vodafone, where Vodafone customers are offered the Readly service and can pay the monthly subscription via their phone bill. Then in June, Readly hit the TV screens with an ad campaign on Channel 4 which has been running for over six months. 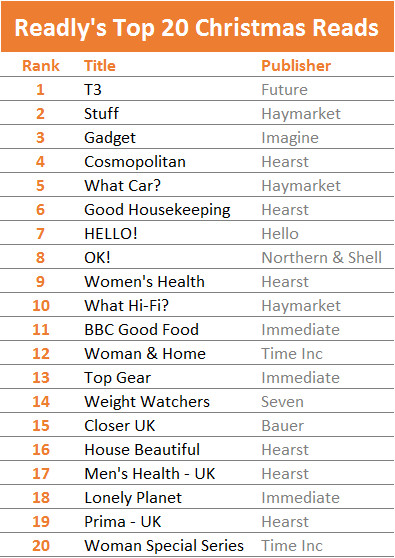 3. Widening the magazine inventory. Readly’s list of the Top Twenty titles read over Christmas shows that the customer base has grown from its core of tech-savvy male “early adopters” into the consumer mainstream.

4. Enhancing the user experience of the service.This is in constant development, but recent examples include the ability for subscribers to interact dynamically with puzzles and crosswords, faster and more tailored recommended reads and in-app purchasing for Apple users. A number of the enhancements are built around stimulating the quick reading “snack”.

Ranj Begley: “Our four-track strategy is one we started out on earlier in the year. Yet it was in the second half of 2016 when it really began to bite, with a key element being our presence on TV with Channel 4. What this all means is that digital editions are becoming a bigger and more accepted part of the magazine reading landscape. Our rapid growth demonstrates that the newsstand environment, where there is a wide range of titles to choose from, is where consumers seem much more open to the idea of digital reading. This is the place where magazine readers are prepared to be more adventurous and experimental, when normally they are quite conservative and print-based in their magazine consumption. All this is good for Readly, but it is also good for the magazine business as a whole”

Readly is a digital service which lets customers have unlimited, “all-you-can-read” access to hundreds of national and international magazines in one app for just £7.99 per month – both streamed and downloaded. Ultra-fast, easy-to-use and convenient – each subscriber can access the inventory on up to 5 devices across the major operating systems – the service has an increasing range of functions, including advanced zoom, bookmark, search and sharing tools. In addition to all the consumer benefits, Readly offers a powerful, risk-free route to market for publishers who can also track how their content is being consumed.

The Readly operation was launched in Sweden in March 2013, but now has offices in the UK, USA and Germany and a rapidly growing user base in more than 50 countries, making it the world’s leading digital platform for reading magazines online. Readly UK started operation in the Spring of 2014 and now deals with 80 UK publishers, promoting 800 UK magazine brands, in addition to a growing inventory of over 2,000 international titles.