Readly, the digital magazine newsstand, has just joined Distripress as it expands into new markets. Distripress is the trade association which promotes the global distribution of press products, both newspapers and magazines.

While Readly remains committed to growing its existing territories of Sweden, Germany and the UK, it is looking to become the major global player in the unlimited, “all-you- can-read” distribution of digital magazines.

The growth rate in Readly’s three core territories is still very rapid with the total number of issues read over the last year totalling over 33m, up by +93% year-on- year. This growth is being driven by two factors: firstly, a rapidly increasing subscriber base; secondly, existing users are spending more time with the service as it becomes an established part of their media consumption and as Readly’s inventory of leading magazine brands grows in every country. Users spend an average of 7.5 hours per month accessing the service across 20 reading sessions which average 22 minutes in length.

The expansion programme is being spearheaded by the Managing Director of Readly’s UK operation, Ranj Begley, who takes on the additional role of Global Content Director. Begley: “Based on our three core markets, we are already Europe’s largest provider of the “all-you- can-read” digital magazine service with a user base in 50 countries. Our ambition is to be the global leader. Joining Distripress is a key part of that strategy as it opens up their international network to us.”

Tracy Jones, Managing Director, Distripress: “Although Distripress was established on the distribution of print products, our members are becoming more and more digital. Readly’s membership is a real indication of the way Distripress is developing to support a rapidly changing global supply chain. We welcome Readly to our annual Congress which is being held in Lisbon next week between September 17th and 20 th.”

Sweden remains the largest and the most mature of Readly’s core markets, but is still showing strong growth with a +31% jump year-on- year in terms of the number of issues opened. Germany (+329%) and the UK (+165%) are sky rocketing in usage. Austria and Ireland have recently come on stream, having been the subject of local launches in the Spring of this year. They are growing at a +241% rate currently.

Begley: “Austria and Ireland provide the template for our broader international expansion. Build an inventory of locally published magazines; then promote to consumers locally through targeted activity. With the support of Distripress, we aim to make a bigger impact in the global marketplace very rapidly.” Readly’s data about its users shows broad similarities from country to country in terms of the demographics of their subscribers as well as which are the hot magazine categories: 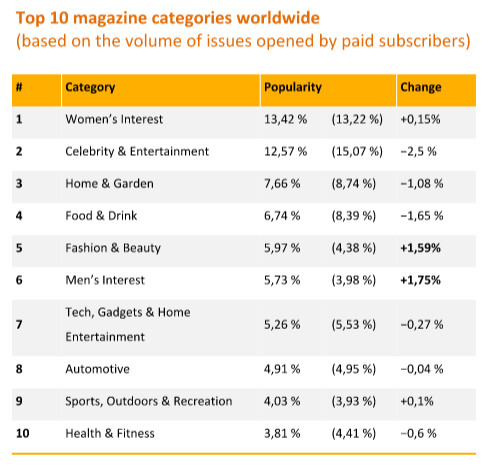 Begley: “As we have moved beyond the male-biased Early Adopters and have become more mainstream, our subscriber profile has also become more evenly balanced between men and women. Women now account for 52% of our users in the UK – a figure we expect to be replicated in other markets as we grow. That fact is mirrored in what magazines people like to read with Women’s Interest and Celebrity & Entertainment our top two categories worldwide. The more international we become, the more obvious it is that what works in one country will transfer into another, as long as we can tweak for local preferences and sensitivities. This is all good news for our own international expansion.”

Distripress is a non-political and non-profit making trade association created for the promotion of the global circulation and distribution of press products. The association is made up of companies, associations and individuals engaged in the national and international circulation of publications - newspapers, magazines, periodicals and paperback books. It currently counts just under 300 members in 70 countries.

The aims and objectives of Distripress are:

Readly is a digital service which gives customers unlimited “all-you- can-read” access to thousands of national and international magazines in one app for a set monthly fee. The service offers fast download and easy, intuitive use so that the reader can read magazines effortlessly. The subscription includes use on up to five
devices, allowing the service to be shared among the whole family so that everyone can read their favourite magazines online. The service has an increasing range of functions, including advanced zoom, bookmark, search and sharing tools. In addition to all the consumer benefits, Ready offers a powerful, risk-free route to market for publishers who can also track how their content is being consumed, offering deep insights into reader behaviour.

Readly International AB, the company behind the Readly service, is privately-owned and headquartered in Sweden. Formed in 2012, Readly today has offices in Sweden, the UK, USA and Germany and a rapidly growing user base in more than 50 countries, making Readly the world’s leading digital platform for reading magazines online. Readly UK started operating in the Spring of 2014. Internationally, Readly deals with over 400 publishers, promoting more than 2,300 magazine brands and holds 60,000 magazine issues in its inventory
that subscribers have full access to. Visit www.readly.com to learn more about Readly.